In Norse mythology, the Dark Elves dwell in caves deep underground and are thought to be as different from Light Elves in behaviour as they are in appearance. With their ghostly pale skin, glowing red eyes, and clad in blue grey armour, they are more fearsome than any goblin. First mentioned by Snorri Sturluson in his book The Edda which was written in the 12th Century AD, the Dark Elves have been thought of as bad or evil for almost the last millennium. 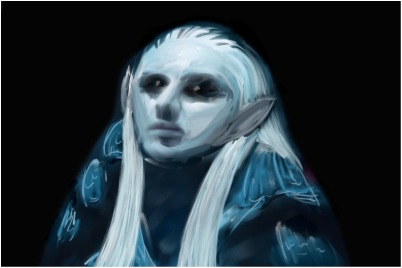 By the 17th century, in Christian folk-lore, they were blamed for causing disease to cattle and people by using elf-shot (a type of crossbow bolt or arrow). The arrow-heads could also be used in rituals by both elves and witches.

In fact, dark elves were blamed for almost everything from a tangle in the hair, called an elf-lock to sudden paralysis – elf-stroke.

They were also thought to be the bringers of bad dreams. The German word for nightmare, Albtaum, means ‘elf dream’, it was believed that nightmares were a result of an elf sitting on the dreamer’s chest.

However, when Snorri Sturluson wrote The Edda Christianity had largely replaced Anglo-Saxon mythology as the dominant religion. This has led some modern mythologists to question whether his description of Light Elves and Dark Elves was influenced by Christian teachings at the time – lessons of good and evil, and right and wrong. Could the Dark Elves have been besmirched purely because their name contained the word ‘dark’? Centuries of stories have been told about them, even films made depicting them as evil, simply because of their name.

The Dark Elves would have good reason, then, for not liking their lighter brethren. Can we really blame them for what they have become?
Return to the Creatures