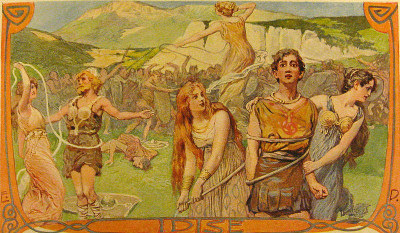 The Idesa were women of great power and were the guardian spirits of their families.

In the picture to the right by Emil Doepler an Idesa can be seen holding off an entire army with her powers whereas others are shown freeing their friends and taking the enemy prisoner. 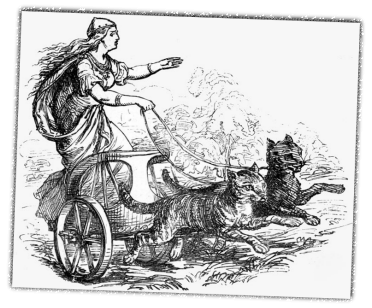 In Norse mythology the Idesa worshiped the goddess Freya.

Freya, together with her twin brother, Freyr, rule over Alfheimer, the realm of the Elves. Alfheimer was given as a present for her brother’s first tooth. Freya travels across the land using her magical falcon cloak, or is pulled on her chariot by her sacred cats.

The Idesa were superhuman beings who occupied the position between mortals and the gods, such as Freya. Their role was one of harmony, helping to link old ideas with new, and keeping the world in balance. It is possible that their power was linked to what modern scientists call Quantum Theory – a power where anything is possible. To find out more about Quantum Power, click here!
Return to the Creatures