But what of the dwarfs – the black elves, the Svaltalfar? Were they good or bad? And where did they live? 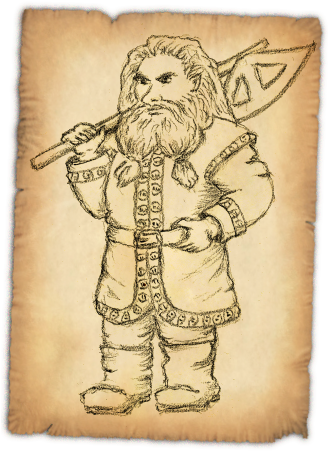 German folk-tales tell of dwarfs living in the mountains and forging weapons in charcoal and fire – this would account for their ‘black’ or ‘sooty’ appearance. They are generally thought of as being good-natured, and of all the elves the dwarfs have had the most dealings with mankind. Lovers of gold and precious stones, dwarfs are craftsmen as well as being keepers of the runes.

A dwarf will reach his full height by the age of three which is half the size of a man, and he will have a grey beard by the age of seven; which is why dwarfs are always pictured as old men. The dwarfs are ruled by their king and live in magnificent chambers under the mountains – the realm of the dwarfs.

Dwarfs can vanish suddenly, whether by magic or simply by skill – slipping into cracks in the mountain and crevices in the hills. They can appear just as suddenly, popping up from some underground passage. Sometimes people have been tempted to follow them, looking for treasure. Often the dwarfs allow humans to do this. But sometimes they capture them, hold them fast, and people are never to be seen again... never interfere in the business of a dwarf – especially when it comes to gold!
Return to the Creatures