The Huldrufolk are mentioned in folktales from as long ago as the 12th century. They are the ‘hidden people’, huldu meaning ‘secret’ and folk meaning ‘people’. They are most well known in Icelandic folklore.

They are mischievous spirits with the fronts of men and the hollowed out backs of trees and give off a luminous white light. 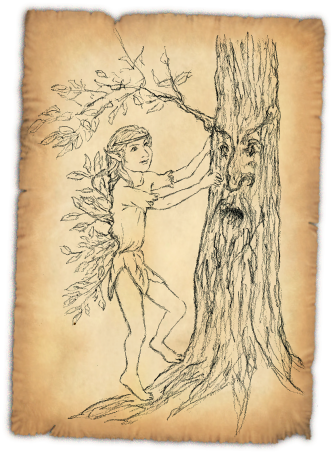 They love music and like to dance with humans. There is a folk-tale from the 15th century where the Huldrufolk took sides with humans to take revenge against a sheriff who banned dancing.

Even to this day Icelandic people believe in the ‘hidden people’ and take care not to damage the rocks where they live or throw stones which might hurt them. They build tiny wooden ‘alfhol’ (elf houses) in their gardens for the hidden people to live in. And often the Huldrufolk will appear in dreams with warnings and messages which are always heeded. This respect for the Huldrufolk comes from living in a harsh landscape filled with earthquakes and volcanoes. It is no wonder the Icelandic people believe that there are mysterious forces at work behind the scenes.

It is possible to learn magic from the hidden people. They are said to be able to influence the unconscious thoughts of others – the power of persuasion. But beware, if you don’t do what they want, they can turn against you.

Return to the Creatures